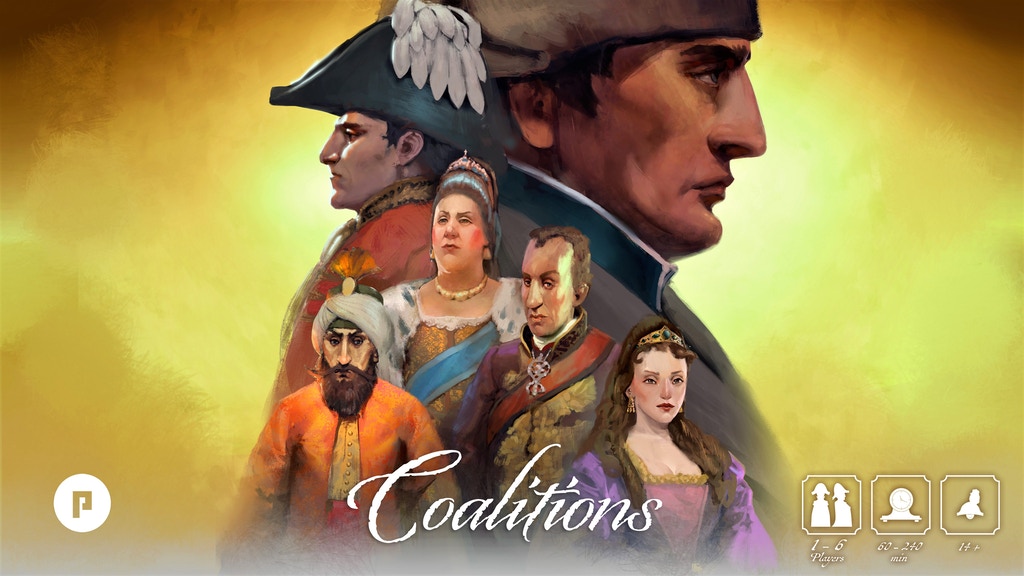 
We hope you thoroughly enjoyed the weekend and managed to play a few of your favorite games. Today marks the Midsummer, and to celebrate the occasion we’re going to let you in on more about what you’ll get when you back Coalitions, including our second daily bonus. We also have news about an exciting new add-on for you.


The Coalitions’ game board - even more board for your buck

As you know, we are committed to innovation and providing backers with as much value as we can. So we thought to ourselves, why waste a perfectly playable surface on the back of the game board? Let’s make the board double-sided! Today we can reveal that each side of the Coalitions’ game board will feature its own map, which can be used for different scenarios. With a two-sided board, plenty of scenarios to choose from and six nations to control, you’ll never get bored playing Coalitions!

Metal coins are a great way to enhance a game. That’s why we’ve just added a set of 30 metal coins to the list of available add-ons for this campaign! These beautifully produced coins come in three denominations and replace the cardboard components from the Coalitions’ core box. Now you can hear the clink and feel the weight of British largesse...

The Ancien Regime: no mere expansion

The Ancien Regime Expansion has its own distinct game board, inspired by a major conflict predating the French Revolutionary and Napoleonic Wars – the Seven Years’ War. The expansion will also add a 7th playable nation to the mix, the Kingdom of Spain. And remember, all nations and all territories on the board are always in play regardless of the number of players, the same as in the Coalitions’ core game.

But that’s not all. You’ve continuously asked about it and now we can officially announce it – the Ancien Regime Expansion will feature a solo mode too!


Pursuit of Victory and the Deluxe Miniature Set

Nation-specific colors simply aren’t good enough for our meeples – time for them to become what they truly deserve to be. Each of the seven nations (yes, we’re including the Ancien Regime Expansion) now has a custom, distinct meeple design!

In addition, there’s one French meeple that stands out from the rest. That’s right, it’s Napoleon, identifiable by his own distinct shade of blue. Vive L'Empereur!

Since Spain features so prominently in the Ancien Regime expansion, it would be remiss of us not to mention a certain YouTube video. Julius Fairfax explains in Spanish all the Coalitions’ rules, the Activator mechanics and the Wheel of War. Enjoy!


We’ve made it! Thanks to you we managed to fund Coalitions, the Ancien Regime Expansion, and on top of that unlock the first daily goal...! Wait, what? Already? Right away? Yes, as promised, once funded, each working day will mean something amazing for each of the backers! Something that will be included in the game (or expansion) box and you will receive it as a thank you for being with us, supporting our project and believing in it as much as we do!


The game has been funded. What now?

This is far from the end. Your support can help us a lot. The more money we can raise, the better targets we will unlock. And the more of these goals we reach, the more improved the game will be! How about when we raise £60,000? The shipping cost will be £1 ($1.4) cheaper? That's an example of one of our stretch goals, completely independent of the daily goals that will be unlocked each business day.

How can you help us? All you have to do is share the campaign!


Daily Goal: Actions on the cards

How about an even more interesting and strategic battle? Now each type of card (there are 4 of them) has a special action that works in a certain way, or if a certain condition is met. Of course, this is a gameplay variant, at first you can play without it, ignoring the symbols. And what do the symbols mean?

Pursuit of Victory is a two-player game of military conquest and diplomatic realignment, of bold action and meticulous planning, a low-complexity innovative grand strategy game playable in a couple of hours. Napoleon will have to face an ever-shifting combination of European continental powers of Austria, Prussia and Russia, consider the fate of the Spanish and Polish people, and keep an eye on the small, but mobile British forces. Britain will have to contain Napoleon’s ambitions, stoke the fire of Spanish insurrection, contend with and subsidize their wavering allies, and wait for an opportunity to strike a crucial blow against the French Empire.

Are you interested? Take a look at our store for more information. This is a pre-order, so we will only charge your cards if the funding goal is met. And we will take into account the lessons we've learned from the premature charging cards for Fire in the Sky, which we intend to sent out during the campaign of Coalitions.

So, you can sign up for the Pursuit of Victory, and if the game does not reach its pre-order target  then you lose nothing. But if it does reach its goal, then help us release another great game!

What's more, the Deluxe Miniature Set from the Coalitions campaign is compatible with Pursuit of Victory!

Pre-orders for the game are ongoing on a separate collection. It will not be possible to add it as an add-on, as Coalitions and Pursuit of Victory will be released on two different dates.


Thanks for your support! We hope our campaign continues to gain momentum every day, but especially today – we have some really amazing surprises and new, juicy details for you!

What's so special about this game? Why have we decided to develop it and offer it to you?

First of all, the gameplay and the strong diplomatic aspect, often a key to the victory, are incredibly fun.  But what enchanted us the most were the Activator system (related to the movement of the army) and the Wheel of War (a rotating action “rondel” that makes all players perform different actions at the same time, and which completely minimized downtime).

Everyone who decided to support our campaign will also receive the Ancien Regime Expansion. But what exactly is this expansion all about? The basic rules are anchored to the reality of the Seven Years' War, an earlier, but no less dramatic conflict. . But that's not all! The expansion box will contain a veritable treasure trove of components: a new, large board, a new playable faction (Spain), a set of tokens and meeples for this faction (the expansion allows 7 players to play!), new mechanics (e.g. imperial election), a new Wheel of War, a new solo variant and completely different gameplay dynamics! Expect even more asymmetry! In point of fact, that’s not just an expansion – it’s a NEW game, one that wonderfully complements the Core and Deluxe Pledge!

Some of you are wondering why the Russian faction in Coalitions is green. Well, there’s a simple answer to that. Many games that feature Russia depicts it in red... but our game doesn’t feature Soviet or post-Soviet Russia. In Coalitions, Russia is ruled by the Romanov dynasty, and the uniforms of the Imperial Russian Army at that time were... green! So, naturally, Russia is green in the game.

Do you want to try out the game?

We have launched a module for Coalitions on Tabletop Simulator! As of today,  you can try your hand at it with friends, or even face the Corsican Ogre (that’s Napoleon) all on your own! Just follow the instructions and start playing! And soon you’ll be able to join the designer on Discord, where he'll present the game!

I hear you're looking for a new rug for your living room, so our Giant Mat will be just the ticket, right? 😉 Well, okay you might want to use it for playing the game too. We've launched options for those who prioritise comfort and atmosphere in their games. Two new accessories have appeared in the add-ons: a set of 7 Cardholders (to keep your cards easily displayed in front of you and still hidden from the other players) and a Giant Mat (size). Just add them to your pledge now and enjoy even more possibilities! 😊 Yes, the Mat will be double-sided too!